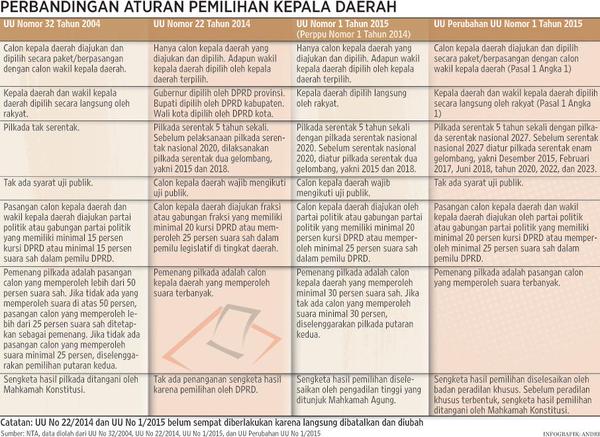 The Commission 2 House of Representatives, or DPR, has asked election organizers to allow relatives of serving regional leaders to run in this year’s elections, amid a move to block such a practice to prevent the rise of regional political dynasties.

The General Elections Commission, or KPU, should “let everyone have the same opportunity to run for public office,” said Dadang S. Muchtar, a House legislator from the Golkar Party.

The KPU already has a restriction in place barring direct relatives of an outgoing governor from seeking the same office, and is planning to extend that prohibition to elections for mayor and district chief.

“We feel that [the restriction] should not be widened,” Dadang said on Thursday, during a House hearing with KPU commissioners on a set of 10 regulations that the election organizer plans to issue.

“There’s no need to implement [the same restriction] to candidates for district head and mayor,” Dadang added.

“If the reason is to prevent a conflict of interest or the formation of a [political] dynasty, then I think that should be the job of the [elections] supervisory committee to determine.”

“The law that we’ve agreed upon doesn’t need a reinterpretation,” he said.

“There’s no need to extrapolate [the prohibition] downward and sideway. So don’t bar a governor’s family from ruling a district or a city.”

KPU commissioner Hadar Nafis Gumay argued that his office was merely acting on the law, which stipulates the barring of anyone running who is “related to an incumbent,” without specifying.

“We’re not trying to change the law. What we’re drafting is actually found in the law, that an incumbent’s power needs to be limited,” he told reporters after the hearing.

“But it seems the majority [of legislators] disagreed. If so, then we can say they have little knowledge of the laws they passed.”

The KPU is trying to limit the emergence of political dynasties across the country in the wake of the decentralization push that began in 1998.

The province of South Sulawesi is effectively run by the family of Governor Syahrul Yasin Limpo. Syahrul was once the district head of Gowa, a post that was previously controlled by his father, Muhammad Yasin Limpo, and now held by his brother, Ichsan.

Syahrul also has brothers, sisters, sons and in-laws in key posts in regional legislatures and the House.

Similarly, the family of Governor Sjachroedin Zainal Pagaralam wields massive control over Sumatra’s Lampung province. Sjachroedin’s father was the former governor, and the incumbent’s two sons are the head and deputy head of two different districts in Lampung.

But no dynasty approaches the scale of that of Ratu Atut Chosiyah, the now-jailed former governor of Banten, who reportedly has at least 30 family members in influential posts including those of district head, mayor, regional legislator and party chapter leader throughout the province.

At least 25 family groups rule different parts of Indonesia, according to a recent analysis by the Republika newspaper.

Through the practices of patronage, cronyism and bid-rigging, such dynasties have long been used to embezzle massive amounts of money from regional budgets.